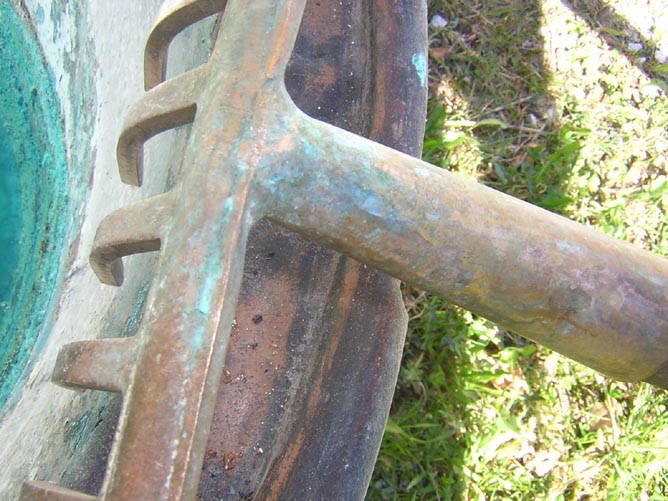 The rake shows definitely no verdigris, these green dyes are oxidation products, such as occur on copper surfaces in humid environments. This staining is not critical in any way, so irrelevant, if it does not bother the owner for aesthetic reasons. Otherwise cleaning could both brass wire brush, or cleaning fluids are used (see below). 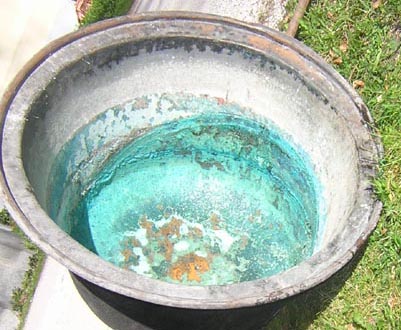 The tank contained a fluid that reacted with copper. Only if it was this liquid to acetic acid, could have developed verdigris. In this case, the coloring products would, however, water soluble, and thus also been removed with the emptying of the boiler. I suspect that the vessel containing alkaline substances, which worked over a longer period, and these blue–green colors evoked:

These products consist mainly of carbonates of copper, potassium and sodium, with varying silicate content. They are nontoxic. Polluters are flushing with fresh mortar, plaster and concrete slabs during the setting process, possibly also from gravel beds (ie, the boiler was in the damp room, for example to collect the leakage in the concrete ceiling?). Alkaline cleaners may also be involved. With the decline of alkaline washing out any new blue-green oxidation products are more on the copper surface. As they disappear on the other hand, not even saying that brushing with a stainless steel or brass wire brush and rinse with water is recommended. Finer dirt e.g. with special protall removed.
The discolorations occur for the reasons then not again.

After a cleaning of the boiler you will know very well that the surface of the material surface was not affected by this: the bare copper reappears. This is a clear indication that this flushing have no material adverse effect, but the copper is affected only in its decorative appearance.